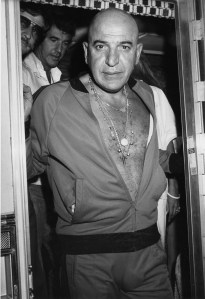 Telly was the hottest number in New York when he was filming most of the episodes of his realistic gritty cop show Kojak, starring as the bald hard-boiled police lieutenant. The television series aired on CBS from 1973 to 1978. At the end of its run, they had a wrap party at the Old Homestead restaurant. Earlier in the evening I met Nina Naham at a commercial product event on the upper East Side and asked if she wanted to come with me to a Kojak party on the far West Side. That was the most successful line in my life. I didn’t know Nina was a die-hard fan. As soon as she heard Kojak she jumped at the opportunity to meet the iconic lollipop cop in person. Thanks to Telly, I transformed my date into my bride shortly thereafter. Telly died of prostate cancer in Los Angeles on January 22, 1994, one day after his 72nd birthday.