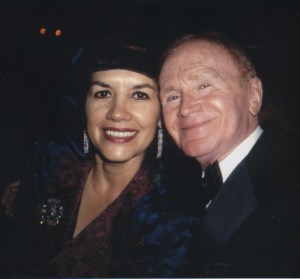 He was born Aaron Chwatt in 1919 in a tenement on the gritty Lower East Side of Manhattan, a neighborhood so tough that “you either grew up to be a judge or you went to the electric chair.” He got his name when he worked as a carrot-topped bellhop in a gin mill in the Bronx. After a stint as a Borscht Belt comedian, he got a part in Sayonara in 1957. Producer Josh Logan picked him over three prize Actors Studio names (Ben Gazzara, Paul Newman, Anthony Franciosa) for the role of the Irish Joe Kelly in James Michener’s bestseller. For his dramatic performance Buttons earned an Academy Award.

I was always indebted to Red for hosting a book party to celebrate my Jewish Celebrity Hall of Fame on March 16, 1987, at Cheers restaurant. He gave me an opportunity to show off as I attempted to roast him with such lines as:

He comes from a very poor family. They were so poor that living in poverty was beyond their means…He was always a patriotic American. During the war he was in the resistance, but they drafted him anyway…This is the last celebrity on earth who never had a dinner—not even at home. If he wants to eat he books himself into a supper club.