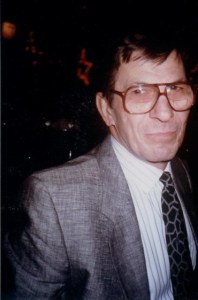 Nimoy, who plays Mr. Spock, William Shatner’s costar on Star Trek, met Mickey Mouse and said, “You and I owe a lot to our parents who could not afford an ear job for us.”

The quips flew fast and furious. The legendary George Burns, at 93, said he can’t retire: “I’m supporting my mother and father.” Morey Amsterdam said it’s nice to be a legend “even if you have to get old to be one.” Radio/TV personality Art Linkletter, who hosted House Party on CBS for 25 years and People Are Funny on NBC for 19 years, served as MC at this event. He also hosted the opening of Disneyland in California on ABC in 1955. A little old lady told him, “I watched your career right from the beginning to the very end of it.”