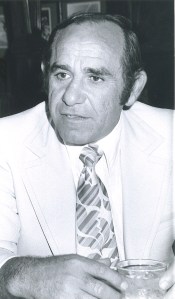 Lawrence Peter “Yogi” Berra helped celebrate the opening of a new Toots Shor restaurant next to Madison Square Garden on September 8, 1975. The great New York Yankees catcher was renowned for his memorable quotes such as “If you don’t know where you’re going, you might wind up somewhere else” and “You can observe a lot just by watching” and, of course, the one we all love: “When you come to a fork in the road, take it.” But be careful when you quote him because he claimed, “I never said most of the things I said.” We shared the same birthday, May 12, though not the same year. Yogi died at 90 on September 22, 2015.