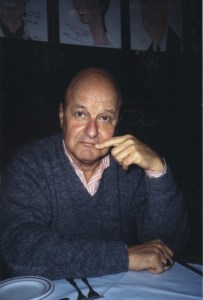 In an interview on October 12, 1987, at Sardi’s, Klemperer, currently playing in a revival of Cabaret on Broadway (for which he received a Tony nomination), talked about his family fleeing the Nazis in 1935. He was born in Cologne where his Lutheran mother, Johanna Geisler, was an opera singer; his father, Otto Klemperer, was a famous composer and music director of the Cologne Opera House and later the Los Angeles Philharmonic. His Jewish father, always interested in religion, converted to Catholicism at age 20 and raised his son and daughter Catholic. Werner said he’s not “a practicing Catholic.” At 82, six years before he died, Otto renounced his conversion and was buried in a Jewish cemetery in Zurich. “Because of my father’s heritage,” Werner said, “I feel very emotionally tied up with Judaism.” He visited Israel with his sister from Switzerland two years ago and was “fascinated and overwhelmed” by a country that “has done wonders for itself.” He earned two Emmys playing the bumbling Nazi Col. Wilhelm Klink, commandant of a POW camp in Hogan’s Heroes on CBS, 1965-71. He died of cancer at age 80 in 2000 in New York.