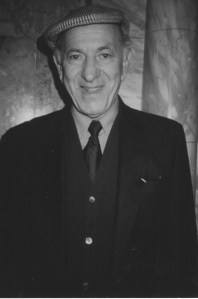 “My mother Rose said if you have a hat, you’ll never catch cold,” Jack Klugman remarked as he sat for lunch at the New York Friars Club on February 17, 1998. Klugman, who played a medical examiner on Quincy M.E. from 1976 to 1983 on NBC, told me about his trip to Israel with Zubin Mehta and Vidal Sassoon, sponsored by Hebrew University. They furnished his room at the Tel Aviv Hilton like a coroner’s examining room just like on his TV show. “They wanted me to feel at home.” We remember Klugman as the slovenly sportswriter Oscar Madison in Neil Simon’s The Odd Couple in 1965 (Tony Randall was the neat photographer Felix Unger). When he starred in the Broadway version of The Odd Couple (replacing Walter Matthau), his mother came to see the show. “You liked it, ma?” he asked. “Yeah,” she said, “but you can’t clean up your apartment?”