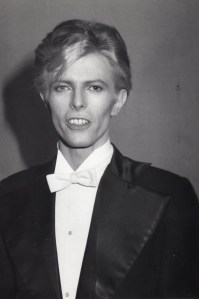 With a reportedly “slow babbling speech,” David Bowie, 28, presented an award to Aretha Franklin for best female rhythm and blues vocal performance at the 17th Annual Grammy Awards on March 1, 1975, broadcast live on CBS at the Uris Theater in New York. Even John Lennon in the audience looked confused, one reporter noted. The National Academy of Recording Arts & Sciences honored the Queen of Soul with a Grammy for her Ain’t Nothing Like the Real Thing.

Legendary record producer Clive Davis remembers Bowie that day as “a vision in an incredibly elegant tuxedo with white tie and his eye-catching shades of orange and yellow hair” (The Hollywood Reporter).

Bowie, formerly known as Ziggy Stardust , the 1972 bisexual alien rock star— a dabbler in Kabbalah who once utilized Nazi paraphernalia for its shock value —celebrated his 69th birthday on Jan. 8, 2016, the same day he released his 25th studio album, Blackstar, while his musical, Lazarus, was running Off Broadway. Time magazine hailed it as “the most dazzling new musical of the season.”

Two days later he was dead following an 18-month battle with cancer.